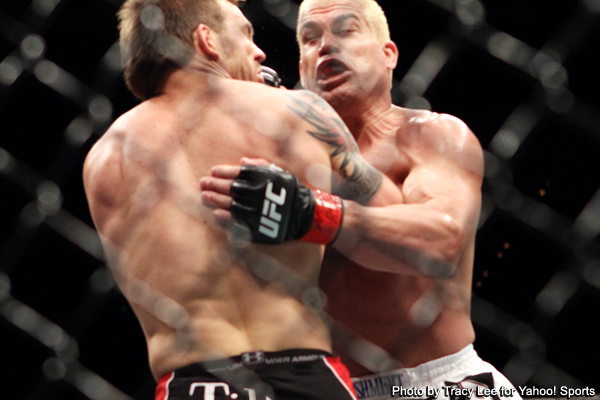 Tito Ortiz came back from the brink of extinction at UFC 132 on Saturday night, winning with a guillotine in the first round over Ryan Bader.

Bader was landing intermittent strikes until Ortiz moved inside and landed a right hand directly on Bader's jaw. Bader's knees buckled, and Ortiz jumped on top of him and sunk in an arm-in guillotine. Ortiz squeezed until Bader tapped at 1:56.

He was jubilant after the fight, resurrecting his gravedigger celebration, then jumping onto the side of the cage. He thanked UFC brass Dana White and Lorenzo Fertitta for pushing him to win this fight.

Ortiz knew going into this fight that it was win or lose his job. He has been a legend in the UFC, but his last win was in 2006 over Ken Shamrock. He hasn't been a champion since 2003. Battling back and neck injuries, he had never been able to return to that form until Saturday.

For Bader, it was a chance to get back on track after losing for the first time in February to eventual UFC light heavyweight champ Jon Jones, but it didn't happen. Since being on the brink of the a title shot, Bader has gone 0-2, losing both fights by guillotine.

This win may not mean that Ortiz is ready for another title run, especially in the UFC's stacked light-heavyweight division. Nonetheless, Ortiz was on the brink of losing his job and possibly retiring, and he won in convincing fashion. That feat reminds MMA fans of why he is a legend in the sport.

Posted by huckoster at 4:18 PM