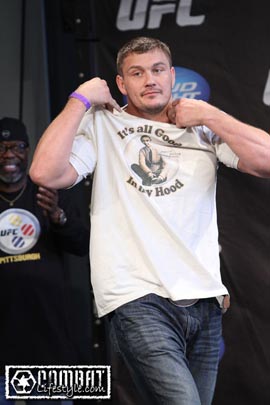 PITTSBURGH -- Burt Watson (pictured in the background), the man who you've seen directing traffic at weigh-ins, works tirelessly to keep things running well at UFC events, and he was rewarded with a chance meeting in Pittsburgh. The UFC's main behind-the-scenes man met President Obama while both were at the fighters' hotel, and told his tale to Cagewriter.

The Hyatt Regency in Pittsburgh hosted both the fighters and the president, who was in town to make a speech at Carnegie-Mellon University. Because of Obama's presence, security was tight around the hotel. Watson's room was near the fitness center, so his room had to be checked by Secret Service before the president could go in and do his daily workout. Watson's room was swept by bomb-sniffing dogs and Secret Service agents.

After the sweep, Watson had to turn on the sauna to ready it for fighters. When he entered the fitness center, he saw the president, and asked if he could go in.

"I opened the door, and there was President Obama, pedaling on a bike and reading the newspaper," Watson said. "I started shaking a little bit. There was no one else in the room."

Because of his job with the UFC, Watson has met a who's who of celebrities, but was still blown away by getting to meet Obama.

"I don't get starstruck, because I work with celebrities all the time. It's not my job to get starstruck, but I was dumbfounded. I walked towards him, reached out my hand and said, 'What's up?' He said, 'How are you?' I said, 'Right now? I'm honored.' And he said, 'Nah, I'm honored.' And as I walked out, I thought, 'Oh [expetive]! Did I just walk out of the room with the president of the United States? Me and him!"

He said that the enormity of the situation didn't really hit him until later.

"Not until I walked out of there did it hit me that I was literally one-on-one with the most powerful man in the world. History has a way of making you a part of it without even asking. Never in my wildest, wildest dreams did I imagine that I would meet the President of the United States."

Watson's calm, upbeat demeanor serves him well in his job as the behind-the-scenes man for the UFC. Working for the promotion since UFC 31, he has seen nearly everything the fight world can muster and has taken it in stride. This was different.

Posted by huckoster at 4:18 PM